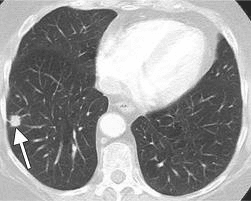 A proposed new recommendation from a somewhat surprising source suggests that people who have smoked heavily for a long period of time should have yearly screening CAT scans even if they have no symptoms.  The U.S. Preventive Services Task Force, whose recommendations are often based more on the overall cost to the health system than on the welfare of individual patients, joined the American Cancer Society, which made a similar recommendation earlier this year.

The recommendation would suggest that patients who have smoked for many years should have low-dose CAT scans of the chest annually to look for early lung cancers.  The proposal includes a complicated chart to help physicians assess risk based on age, number of years smoked, and number of cigarettes daily.  The Task Force cites the growing body of evidence showing that early detection can reduce the number of cancer deaths substantially.

Screening–the practice of looking for disease in asymptomatic patients–has become fairly commonplace for breast cancer, colon cancer, and prostate cancer.  Although experts always debate whether the cost of such screening is justified by the savings in medical costs or human life, most primary care physicians now accept that these screening exams should be offered to their patients.  And although there are exceptions, many patients want these tests because they hope to take advantage of life-prolonging or even life-saving treatments.  Indeed, the practice of recommending screening exams has become so widespread that doctors may be liable for malpractice for failing to offer the tests to their patients.  And insurance companies mow regularly pay for these tests.

Yet in many areas, the Task Force has lagged behind other authoritative bodies in recommending screening exams, to the point where malpractice defendants have used the Task Force’s guidelines to justify failing to order tests or treat patients.  For example, just last year, the Task Force recommended against prostate cancer screening, placing it at odds with the American Cancer Society and other experts in the field.

It is unfortunate that an organization with such an impressive and official-sounding name often delays making recommendations that can save lives.  While there is certainly an expense and inconvenience–and even some risk of medical complications–associated with screening and diagnostic procedures, most patients with advanced cancer wish they had the opportunity for this potentially life-saving or prolonging testing.  The Task Force’s focus on cost per life saved ignores the very real effects of disease on patients and their families.

The Task Force is accepting public comments on its proposal through August 26.  Read the proposed Task Force Recommendation here.