A study designed to identify the safest oxygen levels for premature babies is under heavy fire for causing high levels of blindness, and perhaps even unnecessary deaths, among the 1316 very small infants who were enrolled.  Critics charge that 23 major research hospitals, including noted New England facilities Tufts Medical Center, Brown University, Women & Infants Hospital, and Yale University, subjected babies to added risks, while failing to tell their parents about the potential dangers. 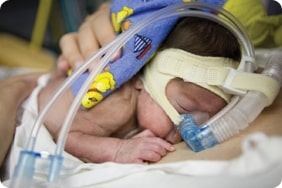 The SUPPORT (Surfactant, Positive Pressure, and Oxygenation Randomized Trial) study, conducted from 2004 to 2009, was designed to find out whether premature babies whose immature lungs required oxygen support were more likely to die or become blind if their oxygen levels were targeted to either a high or a low range.  As with any medical research study, the participants—or in this case, their parents—signed a consent form that was supposed to make sure they fully understood the risks and benefits of the study.  Yet in March of this year, the Office for Human Research Protections (OHRP), an arm of the federal Department of Health and Human Services (DHHS), charged the University of Alabama Birmingham (UAB), one of the lead participating hospitals, with failing to tell the parents that the amount of oxygen their baby received might affect whether the baby would develop blindness, a brain injury, or even die.  Instead, the only risk mentioned was that the device used to monitor the baby’s oxygen levels might cause skin breakdown.  While the consent form suggested to parents that babies who received lower levels of oxygen might have fewer eye problems, it failed to point out that the converse might also be true: babies assigned to receive more oxygen would be at higher risk for ROP.  And nowhere in the consent does it say that a baby might be at higher or lower risk of death, depending on the random assignment to one group or the other.

A month later, Public Citizen, a private non-profit group that advocates for patient safety, fired off a letter to DHHS Secretary Kathleen Sebelius, claiming that the violations occurred at all of the participating hospitals, not just UAB, and calling for OHRP to go further by requiring the facilities to apologize to parents for what they had done, and to institute corrective measures to prevent similar lapses in the future.

Several parents whose babies died have already filed lawsuits against UAB.  As the deficiencies in the consent form, and the adverse effects on some of the babies become more well-known, it is likely that there will be more, including here in Massachusetts and Rhode Island.

The cause of the controversy focuses on the researchers’ decision to assign babies randomly to receive either a higher (91-95%) or lower (85-89%) oxygen concentration.  Normally, the amount of oxygen a premature baby receives is carefully individualized depending on the infant’s medical condition and other treatments he is receiving.  Neonatologists attempt to keep the oxygen levels as low as possible to avoid the complication known as retinopathy of prematurity (ROP), where an abnormal growth of blood vessels in the eye can lead to blindness and other vision problems. The results from the study showed a statistically significant (unlikely to be due to chance or coincidence) increase in blindness for the babies who received higher oxygen levels, and in death for babies who received lower levels.

Not surprisingly, the researchers have their defenders.  They claim that all of the oxygen levels received by babies in the study were within the standard range of treatment, and pointed out that, in fact, the babies in the study had a lower death rate than a supposedly similar group of premature infants.

The treatment of the patients and parents in the SUPPORT study is particularly disturbing because it involves very vulnerable babies and parents who most likely would go to the ends of the earth to improve the outcome for their children.  Understandably, the researchers wanted to increase participation in their study–for which they needed the parents’ consent.  But however well intentioned the doctors were, there is no justification for making decisions based on random assignments rather than the best interests of each individual baby.  In this case, it is likely that the lack of information induced many parents to enroll their babies in the study when they would not otherwise have done so.

There is no question that medical research can lead to tremendous improvements in patient care and outcome.  But particularly in studies like SUPPORT, where the subjects are tiny premature babies, the institutions conducting such research must be vigilant to ensure that their patients’ rights are protected.  It is likely that many of the study participants’ parents are still unaware of the harm their babies faced—or even actually suffered—as a result of their decision to participate.   It is never too late for the hospitals to explain to these parents what actually happened, and to try to atone for the breach of trust and, in some cases, physical damage, they have caused.

Read the letter to the UAB from OHRS here

Read the original published report of the SUPPORT trial here