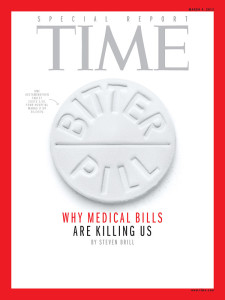 A recent special issue of Time Magazine is a must-read for anyone interested in understanding why health care costs are spiraling out of control.  As author Steven Brill reveals, hospitals routinely reap unconscionable profits by adding huge markups to the charges for common supplies and medications that any consumer could buy online for a fraction of the price, billing patients several times the actual cost for specialty medical devices, and ordering unnecessary lab and radiology studies that generate added revenue.

Brill cites specific examples: $108 for the common antibiotic ointment bacitracin, $1.50 for a single acetaminophen tablet, $7 for the little alcohol-soaked pad used to swab your arm before you get an injection or a blood draw.  The list goes on for more specialized items: $49,237 for a medical device that one source estimated cost the hospital perhaps $19,000 to buy, and $13,702 for a medicine that, using the manufacturer’s financial investor reports, may have cost as little as $300 to make.

Brill’s extensively researched article dissects medical bills received by several patients around the country, most of whom needed extensive medical care due to an unexpected accident or diagnosis of cancer.  These middle-class citizens, all with health insurance, were financially ruined by the hospital bills they received.  Even those who received assistance from billing advocates who specialize in negotiating medical bills, the charges were well beyond their means.

For example:  In the 11 months between his diagnosis and his death, the total bill to a California man who died of lung cancer came to $902,452.  His health insurance paid $50,000 of that total, the lifetime limit of the policy.  And even after aggressive negotiation by a trained advocate, his family still owed nearly $200,000–an amount they can never hope to pay.   A school bus driver from Connecticut slipped in her yard and broke her nose.  Her six hours in the emergency room cost $9,418.  Her insurance coverage was limited to $2500 per hospital visit and a judge ordered her to pay the remaining $7000, less $500 he ruled was duplicative.  A man who sought cancer treatment at renowned MD Anderson Cancer Center in Houston had to pay $83,900 in advance to get his treatment plan and begin chemotherapy.  Needless to say, his insurance plan, which capped costs at $2,000 a day, was not particularly helpful.

Brill contrasts these horror stories with a satisfied medical consumer, an older gentleman who has received excellent medical care from world-famous facilities with minimal out-of-pocket cost to him, while Medicare and a supplemental insurance policy covered the lion’s share of the charges.  Still, Brill notes, the amount paid by Medicare is far below what the providers charge to patients with private insurance or no insurance.  For example, the bus driver with the nosebleed has to pay $6,538 for three CT scans; Medicare would pay just $825 for the same studies.

Brill also exposes the exorbitant salaries paid to many hospital and health care administrators, running to the millions of dollars per year.  The head of the Yale-New Haven hospital system earns $2.5 million per year–nearly $1 million more than the University president.  The chief executive officers of the ten largest non-profit hospitals in the country all make more than $2 million per year–with the highest earner topping out at nearly $6 million.  To put that in perspective, Brill notes that the head of the American Red Cross is paid just $560,000 per year.

One of Brill’s suggested cures for the out-of-control costs is almost counter-intuitive.  Rather than raising the age at which patients become eligible for Medicare, Brill suggests that the eligibility age ought to be lowered.  This would spread the risk by including more younger (and presumably healthier) patients in the pool of covered patients and would lower costs overall because Medicare pays a much lower rate for care than private insurers.  For example, Brill notes that if a 64-year-old woman profiled in his article, treated at a Connecticut hospital for chest pain, had been 65–Medicare would have paid something in the range of $2500-$3000, instead of the $21,000 she was charged.

Interestingly, the medical malpractice system draws only indirect criticism from Brill.  While he suggests some reform might be appropriate, his stated reason is so that doctors won’t incur additional costs by ordering unnecessary tests for fear of being sued.  More on this thought in the next post.