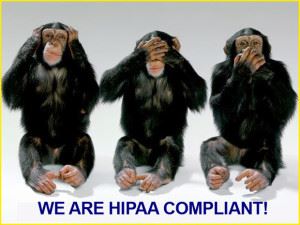 The HIPAA police are at it again.  A Massachusetts federal district court has dismissed a claim brought against Baystate Medical Center by a nurse who was fired for asking about a patient’s condition and expressing her concerns about the hospital’s care of the patient.  The hospital claimed that the nurse’s conduct was a violation of the patient’s privacy, in violation of HIPAA (the federal Health Insurance Portability and Accountability Act).

In June of 2009, Dyjak was caring for a patient who became non-responsive.  As per hospital protocol, she paged a Rapid Response Team that was tasked with responding to such situations, and when the team did not arrive fast enough, she called a Code.  Dyjak was upset with what she viewed as a lack of a proper response, voiced her concerns loudly, and was told to leave the room by the radiology manager.

The next day, Dyjak saw the patient’s partner–who was also a Baystate employee–and mother in a restaurant at the hospital, and asked how the patient was doing.  The partner informed Dyjak that the patient had had a stroke.  Dyjak then related the events of the previous day, including the fact that she had been asked to leave the patient’s room.  She added that there was “some mismanagement” going on and that she viewed the radiology director’s actions as “unprofessional.”  Few people were nearby at the time, and Dyjak spoke quietly.

In Dyjak v. Baystate Health Systems, Inc., the federal court in Springfield ruled that the hospital was within its rights in firing Nurse Dyjak for her conduct and that she had not proven that the hospital’s excuse was simply a pretext for age discrimination.

I don’t know whether Baystate was truly trying to get rid of older workers, but it does seem like the hospital’s termination of this long-time employee was motivated by her criticisms of its staff, rather than her rather benign inquiry about the condition of a patient she had cared for.  Most family members would be pleased by the nurse’s concern–not only for the health of their loved one, but for the quality of care that the patient was receiving.

It’s not clear from the court’s opinion exactly what, if any, medical information Dyjak disclosed to the patient’s partner and mother.  It’s difficult to believe that this was anything more than the kind of conversation that takes place in every hospital every day when nurses update family members.  Perhaps technically, those are HIPAA violations, but at some point, the law must yield to common sense, courtesy and decency.  Most family members wouldn’t be pleased if their inquiries about a patient’s health were met with stony silence from nurses concerned with losing their jobs if they respond.

It really seems like what did Nurse Dyjak in was not her brief conversation with a patient’s family in a quiet corner of a public place, but her airing of the hospital’s dirty laundry.  Most hospitals frown on their employees discussing mistakes with outsiders–and their internal discussions are strictly protected from disclosure by the peer review privilege,   In many facilities, written policies for “Resolution of Clinical Discord” or the like (what do to when providers don’t agree with each other), admonish providers not to express their disagreements in the medical records or in front of a patient’s family.

Dyjak may not have been fired because of her age, but rather for something much more dangerous for patient safety–speaking up about what she viewed as bad patient care.